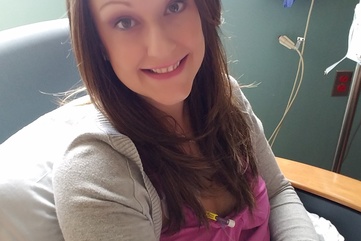 I like to believe that a couple that fights cancer together, stays together. I’m currently battling breast cancer as my husband begins his second battle with non-hodgkin’s lymphoma, all while being mom & dad to two very active children.

Brain was diagnosed with Cutaneous B Cell lymphoma in May of 2015. It was a difficult time for our family, but he completed treatment in August. We were able to get through his treatments smoothly. He didn’t lose his hair or require surgery & felt relatively good throughout. Because of this, we were able to keep the exposure to our kids very minimal & simply explained that dad was sick, but he was getting better. Most importantly to us, we managed to get through without ever saying the “C” word to them…

Shortly after, I found the lump in my left breast but opted to wait until after the holidays to see my doctor… After all we had just been through with my husband, I just wanted my family to enjoy the holiday season without any more stress or worry. A decision I later worried may cost me my life.

I saw my OBGYN in January who referred me to a breast specialist. Following a mammogram, ultrasound & biopsy I was diagnosed with Stage 2B Invasive Ductal Carcinoma in February. A CT scan identified an additional mass in the other breast as well. My treatment apparently wasn’t going to be as quick & smooth as my husband’s & we knew our kid’s would have questions.

I underwent bilateral mastectomies with tram flap for reconstruction all in one very long surgery lasting nearly 14 hours. I had 15 lymph nodes removed of which three were cancerous. I now suffer from lymphedema as a result of the missing nodes. I went through eight rounds of chemo over the course of four months, which inevitably caused me to lose my hair & made being a mom extremely challenging at times. I am in process currently of completing 33 radiation treatments total & have one more surgery remaining to compete reconstruction in the months ahead.

As I was going through treatment, my husband began to notice what appeared to be tumors returning that looked similar to those he had previously… over the next couple of months he underwent testing & there was some concern about a mass in his lungs. However, a clean PET scan confirmed our hopes & the cancer thus far is thankfully just at the skin level. It appears that his cancer has either relapsed or was never fully gone in the first place. His new treatment plan includes four rounds of rituximab & will follow with maintenance treatments every other month for approximately three years.

Through it all our kids have been resilient & amazing! We’ve continued to keep the impact of our battles on them minimal, while filling them in with only the necessary details that are comprehendible for a two & five year old mind. They are the best encouragement, always telling us how brave we are, holding a hand for a shot or finger poke & most of all giving extra snuggles, hugs & kisses. When my hair began to fall out, we shaved my head as a family event & let the kids help. My son yelled “I love it! I love it!”

A lot of people ask how we manage to stay so positive while cancer challenges both of us… The answer is pretty simple, we have a lot to be thankful for & we know that now more than ever. If ever there were two people meant for one another it is truly us, who better to help you through this journey than your best friend who can relate in a way that most others can’t. While most would say we’re unlucky to have both gotten cancer, we would say we’re lucky to have found one another & be able to go through this together.