Holiday Foods That Can Be Fatal for Your Dog 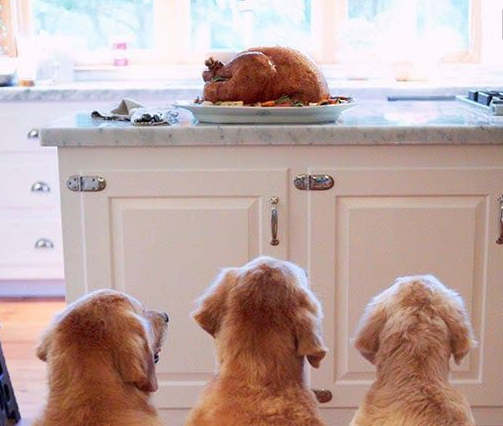 Dogs are frequently very clever and mischievous beggars, but the excitement and smells around Thanksgiving are enough to send their brains into overdrive. A plate of leftovers will have them drooling faster than the sound of Pavlov’s bell.

Like most loving and adoring dog owners, we frequently feel that we are being unfair to our pets when we deny them even the tiniest morsels of table scraps. And let’s not forget that those well-practiced puppy dog eyes don’t help out at all, either. One sad look and a whimper is all it takes for most dogs to melt the hearts of their owners and win a tasty treat.

Some people really only have a problem with feeding their dogs people-food because they want to promote discipline so their dog isn’t begging every time the refrigerator door is opened. But in all reality, there are some bigger and shockingly negative consequences of feeding your dog food that was meant for humans.

Dogs are, as we all know, canines. They’re not humans and their bodies are built completely differently–right down to their digestive systems. While many dog owners are already aware that certain foods can make their dogs unbearably gassy, some foods can cause them severe suffering and even death. Instead of leaving it to chance, you are much better off warning your guests not to feed your dog if you know that you will prepare holiday dishes that could harm your pet. The following are some of the most dangerous foods for your dogs that frequently make appearances during the holiday season.

Cooked Bones from the Bird of Beast

Dogs like bones. You know it, I know it, and the pet-care industry knows it. The image of a dog and a bone is so deeply ingrained many of their other chew toys and treats are shaped like them. But you will want to take a second to think the next time you consider giving your dog a bone that has been cooked.
Cooked bones actually splinter a lot easier than raw bones, and for that reason cooked bones pose a significantly greater risk to your dog’s health. While cooked bones could splinter in a dog’s mouth and cause them severe pain, the worst danger is a bone splintering in their digestive tract or intestines causing internal damage.

While a bowel obstruction is a serious threat that could merit a trip to vet at the very least and possibly even surgery, it is also possible that a splintered bone could cause internal bleeding. We all know how hard it is to say no to your dog when they are begging, but you shouldn’t give them cooked bones at all. It’s just too risky. Instead, give them a treat from a pet store that they can chew on for a long time instead of a bone that could potentially kill them!

Plenty of dog owners like to give their furry friends a taste of alcohol. And it’s no mystery that many dogs enjoy the taste of beer. But this is extremely dangerous. As we all know, alcohol is technically a poison that inhibits nervous system functionality, and the drawbacks are magnified in dogs.

Their bodies and livers are most often smaller than a human’s, and the list of negative effects are extremely worrisome. You can’t possibly know how intoxicated your dog is without bloodwork, and let’s face it–that simply isn’t practical. Alcohol can cause negative conditions such as low blood sugar, comas, seizures, arrhythmias, and even death. The next time your dog starts to whimper for a beer or egg nog, don’t poor any in their dish.

With exception to people with special diets such as vegetarians and vegans, the holidays just aren’t the holidays without turkey. But the problem for dogs is that turkey skin is rather high in fat, and the way we prepare turkeys makes them even more dangerous. The skin on a turkey can act like a sponge and soak up all of the savory goodness of butter, oils, and marinades that make our mouths water each holiday season.

All of these fats are very hard for a dog to digest, though. Not only can it give them discomfort in their digestive tracts, but in the long term a diet too high in fats can cause pancreatitis.

Nutmeg is a popular holiday spice that is frequently used in hot beverages and dishes containing sweet potatoes as well as pumpkin pie. But you need to think twice before you give your dog some Thanksgiving leftovers with any nutmeg in it. This spice can cause nervous system disorders that result in seizures as well as death.

Nutmeg is also frequently found in egg nog, which packs a double whammy against your dog’s health and well-being since alcohol is so detrimental to their health as well. Though just a little bit of nutmeg might cause them some mild suffering and discomfort, they can actually die if they eat too much of it. This is due to a chemical found in nutmeg called Myristicin, and while seizures are a common symptom it can also cause dehydration, nausea, and muscle aches.
In the event that you notice your naughty pooch got their jowls on some food that contains nutmeg, you’re going to need to monitor them closely for a while. If you see your dog behaving oddly or in a way that looks like they are in discomfort you need to take action right away. Vomiting is a huge red flag, and you will need to contact your vet as soon as humanly possible.

Last but not least, don’t feed your dog any amount of onions. The problem with onions is that they are used in countless different seasonal dishes such as casseroles and meats. But watch out – onions contain sulfides that are extremely toxic to your dogs. Though many people are aware that cooking onions alters them chemically, cooked onions still pose a massive toxicity threat to your dog. If your dog eats too much of them, your dog can even become anemic.
These five items are far from the only foods that can be harmful to your dog, but they're especially common around the holidays. Make sure the holiday season is a happy one for everyone in your household—human and animal—and be careful what you feed to your dog (or what they can reach themselves!).

Categories: Family, Holiday
About The Author