Catching up with Elinor Otto - A Real Life 'Rosie the Riveter'! 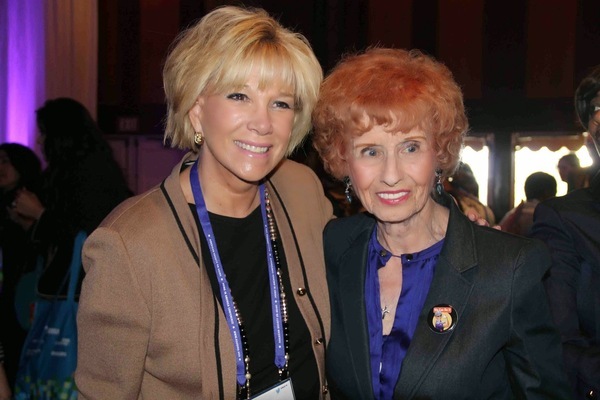 During WWII most of the men in our country were taken away from their jobs in the workforce and summoned to fight in the war. With our working men gone, America was left in great need of production workers. When our government called for women to step out of their homes and into factories about 6 million women reported for duty. They were trained to help build aircrafts, parachutes and other items needed for the war. These women became known as "Rosie the Riveters."

I am honored to have met Elinor Otto, a real life “Rosie the Riveter” last year at an event in San Diego. Recently my friends at A Place For Mom caught up with Elinor to see what she has been up to and to find out more about her inspiring life as a “Rosie”. I was not surprised to hear that Elinor is still a very busy woman; Elinor speaks at events around the country and will be at the Spirit of '45 70th Anniversary Commemoration this August 14 - 16.

Here is what Elinor shared during an interview with A Place For Mom:

I began my career as a riveter working at another aircraft manufacturer in 1942 (I still have copies of my original pay stubs!). I was laid off at the end of the war in 1945, but later worked with Ryan Aircraft from 1951 to 1964, before joining Douglas Aircraft in 1965, which became MacDonald Douglas and later merged with Boeing. So technically, my career totaled 67 years, with a short period of time when I was out of the work force to have a family. I want to make it clear that I didn't actually retire: The Boeing plant in Long Beach, CA where I was working is being shut down, and the decision was made to let the more senior employees go first. My section was laid off last November. I was really hoping to continue working there at least for a few more months up to my 50th anniversary at the plant. If they hadn't closed the plant, I'd still be working there. In fact, since I was laid off, I've actually had a couple of offers to work - as a riveter! I plan to stay busy, since this is what keeps you young!​

2.   As you meet other "Rosie's" have you detected any similarities in character?   ​What characteristics do you share?

Well, we're all very pleased to be getting this special recognition, especially at this time in our lives. And it is fun to share our stories about what we did during the war, and our lives after it was over. We all seem to have the same pride in having done our part in paving the way for women in our country, ​ and every Rosie felt it was a very positive experience for us to have had as young women and that it shaped our character.

3.   When you think of your life during the World War II and being part of the Greatest Generation, what is one of your strongest or most favorite memories? ​  ​

I think the feeling that we were all making a difference, that way we bonded together and how fulfilling it was to being working hard for the sake of the country, buying war bonds, the music of the time that lifted our spirits, the feeling of being involved in a big adventure together. Something else that I like to remember is the fact that ever since I first began working as a "Rosie," in 1942, I actually used a rivet gun - I resisted any suggestion that I switch to clerical or administrative work that was more typical of women's jobs. I was proud to be able to do the same highly skilled manual work as men, even though I was very petite. In fact, the one thing I asked that I be able to take away from Boeing when I left was the rivet gun that I used right up to the day I was let go. I have it displayed on my kitchen counter!

4.  What advice would you give other seniors who are still in the workforce? ​

Do your best to apply your experience and prove yourself every day - your work ethic is the most important thing.​ Sometimes you have to work smarter. And most important: keep a positive attitude.  As I like to tell the young people who I meet, "Don't sweat the small stuff."

5.   Tell us about the Rosie Rallies that are taking place this August:

On Saturday, August 15, the National Parks Service will be having a similar "Rally for the Rosie's" at the Rosie the Riveter Home Front National Historical Park in Richmond, CA as part of the nationwide commemoration of the 70th anniversary of the end of WWII this year.   ​They are working with groups like the Association of Rosie the Riveters of America and others to organize Rosie Rallies around the country, and are setting up a way for Rosie lookalikes to send in their photos and comments so they can be shared with the public. Last year, the Yankee Air Museum in Michigan set a Guinness World Record by getting nearly 800 women to dressed up as "Rosie's" to help raise money to save and restore the Ford Willow Run Bomber Plant, so everyone's going to be trying to set a new record!  The idea is to draw attention to the contributions that women of America's “greatest generation" made and how they helped expand opportunities for women.  It's also a chance for women of all ages to come together in a show of solidarity for what must still be done to make sure women have equal opportunities. I think it's going to be a lot of fun and am looking forward to seeing all the photos!

6.   You have been on national television and met many famous people. ​  What has it been like having so much attention?

At first it made me very nervous and felt pretty overwhelming, since I had never thought much about the fact that I was a "Rosie" or how unique it might seem to other people that I was still working as a riveter building airplanes in to​my '90's.  Now I realize that my story is rather special, and is attracting a lot of attention not just to me but to all the women of my generation who were part of the war effort more than 70 years ago. I feel so blessed to have been able to meet some of these important people, like YOU, and it makes me feel important, too!​ I also feel like I’m sort of an ​ accidental celebrity because of all this public recognition at this point in my life, just for being me, and that I should use this opportunity to help make people more aware of all of these women, and to also remind people that age doesn't really matter, and we older people still have much to contribute in so many ways.